At least it used to be.

Since moving back to cut expenses while I finish school, this route has been physically more challenging than it used to be. In fact, I haven’t even been able to run the entire route. I stall out at about the same place every time. I thought it was just b/c of being older, or trying to get back into shape.

But it hasn’t gotten any easier, even though I can run farther and faster other places, and lately I began to realize why. It’s not any more physically challenging than it ever has been, but one particular part of my old route has dredged up particularly painful memories, some nearly a decade old, some fresh, in the last few months.

My stall outs haven’t been physical, they’ve been psychological. They’ve occurred when I’ve gotten distracted with the “whys” and the “what ifs” attached to the houses I pass. Instead of running being a time when I clear my mind, refocus on God, commune with Him, my running became a time of reflecting on the past and regretting much of it. It literally weighed me down til I had to walk.

And today, I just couldn’t do it. This part of my run is nearly a mile, and it’s relatively flat, but I couldn’t do it. But I had four miles to run, so I had to do something.

So I chose another route.

And not only did I run it, I hit an elevation PR. Pretty cool. 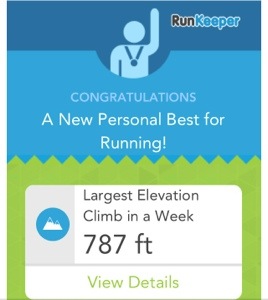 To some, that may seem like the obvious thing to do, but how many times to we do that in our own lives, in relationships or other issues?

How often do we find ourselves limping down the same painful road over and over again when all we have to do is pick a different path?

The new path I picked today was hard. There’s a steep elevation, right in the middle. But I’ll tell you one thing:

The temporary pain of the new uphill challenge far outweighed the familiarity of the old, downhill pain.

I know that old route will always be there, and one day, when those emotional wounds have healed, I can run it again. But in order to leave that old route and go a new way, I had to get to the point at which the benefit of facing a new challenge outweighed the pain of constantly reopening old wounds.

So how does that relate to our spiritual and relational lives?

When we’re “trapped” in a spiritual rut or an unhealthy relationship or other situation, what stops us from taking the challenge of trying another route?

Is the same old pain and heartache at least familiar, and we’re not willing to risk that a new challenge may be even more painful?

Remember this: “If the Son has set you free, you are free indeed.” The new challenges we face with Christ can be difficult; but we will never face them alone.

Sometimes, all it takes to break free from a long term cycle of pain is to just pick a new path.

Which path will you pick today?