“When you give a dinner or a banquet, do not invite your friends or your brothers or your relatives or rich neighbors, lest they also invite you in return and you be repaid. But when you give a feast, invite the poor, the crippled, the lame, the blind, and you will be blessed, because they cannot repay you. For you will be repaid at the resurrection of the just.” ~ Jesus, Luke 14:12-14

I have to be honest. The whole “Appreciate Chick-fil-a Day” that’s planned for this coming Wednesday isn’t sitting well with me. I haven’t been able to put my finger on exactly why I have a problem with it, but I think it may be a collection of things.

For starters, anyone who has ever been to a Chick-fil-a at lunch knows that they are not lacking appreciation. Lines are typically out the door to Dine-In and around the building to Drive-thru. We love Chick-fil-a, and they know it.

The fervor with which most are supporting the event gives away that their heart is more speaking out against homosexuality than it is speaking for our First Amendment rights to free speech. Whether it is the intent or not, the whole thing just feels like an “us vs. them” spectacle.

I haven’t said much of anything about the Chick-fil-a kerfuffle. I just haven’t been able to put words to my heart.

But tonight I heard Tony Merida bring a message from the Word about meals and hospitality, and it impressed upon me an urgent need to ask people to consider carefully your decision on Wednesday.

In the Gospels, the method of ministry Jesus used was breaking bread with people. Tony said that you can trace Jesus’ path through Luke, and He is either on His way to a meal, at a meal, or leaving a meal. He met people at the dinner table, and we should, too.

In the verses above, Jesus tells his host that the next time he has a party, he needs to invite the marginalized of his society. Those that Jesus describes, the poor, the crippled, the lame, the blind, are those that the Pharisees had declared unclean, unfit to worship with them. They are on the outskirts, they are the marginalized. They are “those people.” Jesus ate with both the Pharisees and with “those people.”

He ate with the Pharisees to call out their sin.

He ate with sinners to call them out of their sin.

The Pharisees rejected Him, but the sinners loved Him.

One thing I’m sure Jesus would never have done was go to a meal specifically held to remind “those people” just how marginalized they are. Jesus invited the marginalized to dine with Him. The lost around you are going to expect you to be one of “those Christians” on Wednesday. They will expect you to exclude them and go with all the other Christians to Eat More Chikn together.

Perhaps a better way of showing Christ to a watching world will be to do the exact opposite of what “everyone else” will be doing on Wednesday. Instead of taking a conservative/Republican/evangelical stance about the Great Chicken Debate, stoop in humble service and meet a marginalized person where they are.

On Wednesday, take Jesus to those who are not invited to Chick-fil-a. 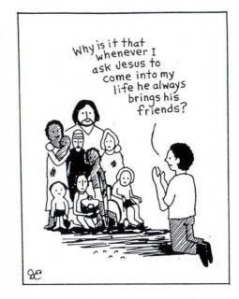 Invite an unbelieving co-worker to join you for lunch. Let them pick the place and you pick up the check. Ask them questions and be genuinely interested in their life.

Take lunch to a shut-in member of your church. Heck, go buy Chick-fil-a for you both and then spend some time in fellowship with someone who knows what it means to be lonely.

Prove to your gay co-worker you’re not one of “those Christians.” Eat lunch with him or her and don’t attempt to convert them to heterosexuality.

Hang out with some homeless people. Spend time at cancer treatment unit. Or an AIDS support center.

If you really want to support the good work Chick-fil-a does with their camps and college scholarships and marriage retreats, take the money you would have spent on your meal and donate it directly to the Winshape Foundation.

Now the tax collectors and sinners were all drawing near to hear him. And the Pharisees and the scribes grumbled, saying, “This man receives sinners and eats with them.”
Luke 15:1-2

Instead of counting yourself in the number of good First Amendment-supporting Christians, just consider counting yourself in the company of Jesus. Receive sinners and eat with them. It will speak volumes to those who already know what the church thinks of them. Show them instead what Jesus thinks of them. I think He may care more about who we eat with than where we eat.

25 thoughts on “Would Jesus Appreciate Chick-Fil-A?”