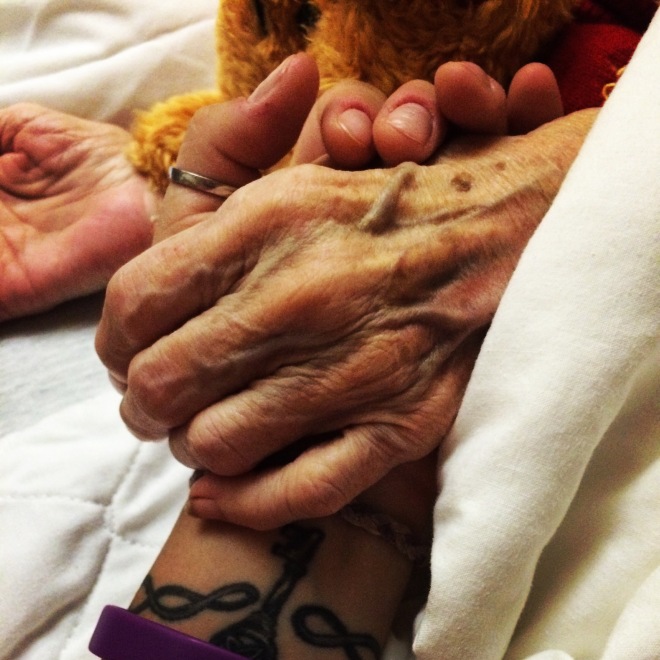 I sleep just like my grandmother. Curled up on my side, one leg stretched out, the other pulled into my chest. A pillow between my arms. I didn’t know that she slept that way until last night, as I watched her curled up in a hospital bed, finally sleeping peacefully. For a little while, she is not consumed with pain.

I share her feisty nature, which is still obvious in spite of the fact that she has wasted away to skin, bones, and the cancer that fills them. That peacefulness was disrupted briefly when Robby the CNA rolled her over and she let him know that he had “messed up the bed.”

I wonder as I wander, just like the gentleman next door, who also paces in his pajamas between his room and the kitchen.

Shared bathrooms between suites. Pajama clad people shuffling, half awake through the halls, in search of coffee. Other people sleeping, oblivious to what’s going on around them. It’s like my college residence hall, only it’s the Hospice unit where my Nana has come for her final days.

One thing that unites all of us who are living is that, one day, we will be living no longer. For all the differences that we think separate us as people, life and death unite us like nothing else.

There is nothing new under the sun. The older I get, the more I see in the now, and the more I learn of the then, the more I recognize that we all have a deep yearning to be different, be unique. We want to be seen and be known.

And we are. Unique. One of a kind. Fearfully and wonderfully made. We are Imago Dei.

The struggle comes, I think, in the fallen desire for our uniqueness to be recognized as better, as right. And so diversity is not celebrated, but scorned. We fail to be unified in our diversity because we fear what we do not know.

As I sit in the quiet, at that moment when the sky is gray and pink with all the anticipation of the coming day, all I can think is, “What am I anticipating today?”

The last day of classes before Thanksgiving break.

The birth of babies.

News of a former coach receiving a life saving transplant.

The day my Nana steps into eternity.

War overseas and rioting at home.

Christmas being provided for mamas and their kids by generous people.

There is nothing new under the sun.

But if the best is only possible with the possibility of the worst, bring it on, whatever the day may bring, because each day confirms that we share so much more than we will ever know.