This weekend has been a yard work weekend. After ten weeks of volleyball’s regular season, I took two days to clean up my sorely neglected yard. Fences needed to be cleared, bushes trimmed, grass mowed, beds weeded. There was a LOT of work to do. 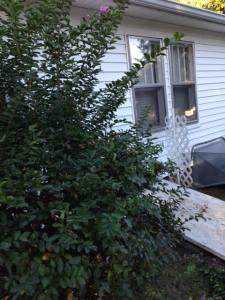 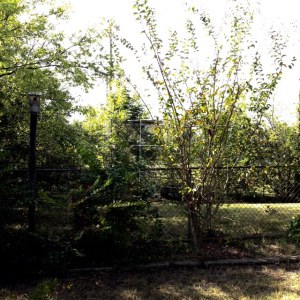 For a bit of background for this story, you need to know that, for months now, my puppies, Scout and Atticus, have been on a wireless fence system to keep them from wandering into the road or the neighbor’s yard. The appearance of their being able to roam free is an excellent home security system. The down side to the system is that, in order to limit their access to the neighbor’s yard, they do not have free reign of my entire yard. Rectangle shaped property and circle shaped wireless fences don’t work well together. So Scout and Atticus have experienced several months of being unable to get to the back half of my yard. 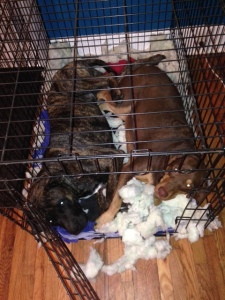 Cue this weekend. It was a stinky week, personally, spiritually, and professionally, but it was a glorious weekend, which meant I needed to be outside. Badly. And the puppies followed me all around the yard; until I moved toward the back of the yard. At that point, the puppies quit hanging out with me. When they got to the border of the wireless fence, their collars would beep and they would back up and lie down, getting as close to me as their collars would allow, but never going beyond that limit.

I decided this afternoon that I would let them wander the whole yard since I was going to be out there, so I took off their red fence collars and put Atticus’ regular collar on him. I couldn’t get Scout to sit still long enough to put hers on, so she went collarless. This is the point at which the teachable moment began.

As I walked to the back of the yard, they both followed me to the point that their red collars would have beeped if they had them on, and they stopped and laid down. It didn’t matter how much I called for them, they weren’t coming. They had spent enough time on those red collars that they knew not to go any further or there would be a consequence.

In an attempt to coax them to the back of the yard so that they could run and play, I walked to Atticus, gently held his collar with two fingers, and led him beside me toward the back yard. He was very tentative– until he got several feet past the “shock zone” that he knew should be there. When he got past that part and I was still with him and nothing bad had happened, he wandered around, smelled things, and generally chilled out.

Scout, on the other hand, stayed in the wireless zone, barking endlessly for us to come back to her. Since she didn’t have a collar on, there was nothing for me to hold on to in order to lead her back therewith us, and she would have none of the idea of simply following me out there.

As I watched this scene unfold, the picture of how the Law, Grace, and bondage to sin work in our lives unfolded in my mind as well.

These are the Law:

They tell the dogs just how far they can go, and they punish them if they attempt to overstep their boundaries. But the Law is meant to protect them; before the collars, I once chased Atticus across South Moore Road and about two blocks down the street. Barefoot. In my PJs. With Crazy Hair. At 5:30 am. It was special. The Law, in this case, is good. It taught Scout and Atticus right from wrong.

Then one day, the Law was removed. The punishment was no longer a threat. I’d taken that threat and put it on the table on the back porch. Yet the puppies still respected the boundaries the Law had set in their lives. They were free, but still living by the Law. They knew that boundary was there for a reason, and they kept it.

Until I put a new collar on Atticus and led him away. It reminded me of the opening statements of Paul’s letter to the church in Galatia:

Galatians 1:6 I am astonished that you are so quickly deserting him who called you in the grace of Christ and are turning to a different gospel– 7 not that there is another one, but there are some who trouble you and want to distort the gospel of Christ. 8 But even if we or an angel from heaven should preach to you a gospel contrary to the one we preached to you, let him be accursed.

All I had to do was put a different collar on him, and he followed me right past the boundaries set for him and into an unprotected and dangerous world. This new collar represents bondage in the life of a believer. Atticus could have roamed free within the set boundaries, collarless and without fear, but by taking up a new collar, a new form of bondage, he left the boundaries he knew and didn’t quite know what to do with himself. But take note of the bondage that led him astray, for they are what spoke volumes to my own heart: 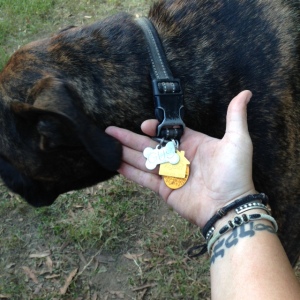 One tag is his name. Oh, can’t our name, our reputation, become an idol and a bondage?

One is his rabies tag. Look, he’s a good dog. He’s done all the right things to be considered good. Maybe for us that’s giving time or money to good causes, or going on mission trips, or attending the right church or small group. He’s checked off his legalistic list of things to look good.

The middle one is his microchip tag. He’s even a “member” of a home. Sometimes church can become an idol of bondage. Do you belong to the “right” church? Listen to the “right” super pastors or worship groups? Ascribe to the “right” doctrine of the the day?

None of the tags on his new collar of bondage are bad things. In fact, in the right circumstances, they are very good things. But in this case, they were use to lead him away, and often, it’s the good things in our lives, done for the wrong reasons, that get us into trouble.

Now, back to Scout. Let’s look at the picture again with the imaginary fence line drawn in:

Scout is sitting, barking her fool head off at Atticus, begging him to come back. But she refuses to cross the line to come get him, and there is no bondage around her neck for me to lead her astray. She is free. Free enough to roam within the boundaries given to her while still knowing her limits, even without the threat of punishment.

That is the freedom we have in Christ! He said Himself that He came not to abolish the Law, but to fulfill it. Scout is a picture of a believer free of bondage, trusting the one who knows and loves her. I removed the collar of the Law, yet she continued to trust that those boundaries were still what were best for her. And because she did not allow herself to be put into any other bondage, she could not be led astray. She was even in the position to call for her little brother to please get back in line and come back to the right side of the boundary. Which is exactly what he did.

For freedom Christ has set us free; stand firm therefore, and do not submit again to a yoke of slavery. Galatians 5:1

One thought on “On Law, Grace, Bondage, and Dog Collars”